Incomes Growing Faster than Debt in US 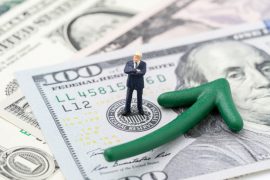 Five years ago, economists predicted that American consumer debt would rise to $3 trillion before the end of the decade. As the year 2018 comes to a close, that debt is reaching $4 trillion. At the beginning of 2018, credit card debt was at an estimated $1 trillion. Other deficits, like student loans, added up to $2.93 trillion. At this point in the year, we are likely to see the country’s total debt grow even larger. Millions of people across the United States are currently using their credit cards and savings accounts to buy gifts for their loved ones. Experts see this increase as entirely usual, meaning that these rates are not a viable way to score the U.S. economy.

Authorities say that Americans will likely see their credit card bills increase by five percent as a result of holiday spending. That roughly equates to $600 million in overall expenditures nationwide, which is sure augment the consumer debt up to $4 trillion.

No Reason to Worry?

Tendayi Kapfidze, a chief economist associated with LendingTree, confirmed that there isn’t too much to worry about with the increased debt rate. In addition to the rise of debt, citizens are experiencing an increase in income growth at about the same percentage. The economy is more stable now than it was during the housing crisis and recession of 2008, which means the issue is not that severe. Real estate values, as well as bank deposits, have increased and grown at a faster rate than debt. To add to this, homeowners have received $10 trillion in home equity. These significant increases over the past decade are a much better way to gauge how the country is doing financially.

Kapfidze stressed that one of the best indicating factors of economic growth is income. Currently, the boost in income rates is outpacing the amount of debt. Although the country’s total deficit is rising, private debts are decreasing. When people have less obligations, they tend to spend more, contributing to a boost in economic life. LendingTree also found that the number of delinquency rates has remained low as well, so it’s clear that individuals are making enough money to pay back their loans and mortgages without defaults.

Effects of Interest Rates on the Economy

Everything may change, however, if interest rates continue to climb. Credit card APRs saw a three percent increase within the last two years. When lenders demand more money, that significantly impacts a person’s ability to pay off their debts. To avoid escalating their payments, people start to avoid using credit cards and taking out loans, which slows the economy.

Talk to an Illinois Attorney Who Deals with Debt

The best solution to avoid a credit card pitfall is to watch your debt, according to Kapfidze. Plan ahead, don’t make large purchases you can’t afford, and keep up a savings account in case of emergency. If you’re already in a bad financial situation, talk to an Illinois credit card debt attorney who can help you reduce your obligations and figure out your best course of action for eliminating debt. Learn more by contacting the Benveniste Law Offices at 1-800-497-5358 today for a free case evaluation.

PrevWhy Using Your Credit Card for Emergencies is a Bad Idea

Why Using Your Credit Card for Emergencies is a Bad Idea
December 19, 2018

Paying Off Student Loans after a Job Loss
December 15, 2018

How to Remove Your Name From a Cosigned Loan
November 28, 2018

What You Need to Know About Travel Loans
November 21, 2018